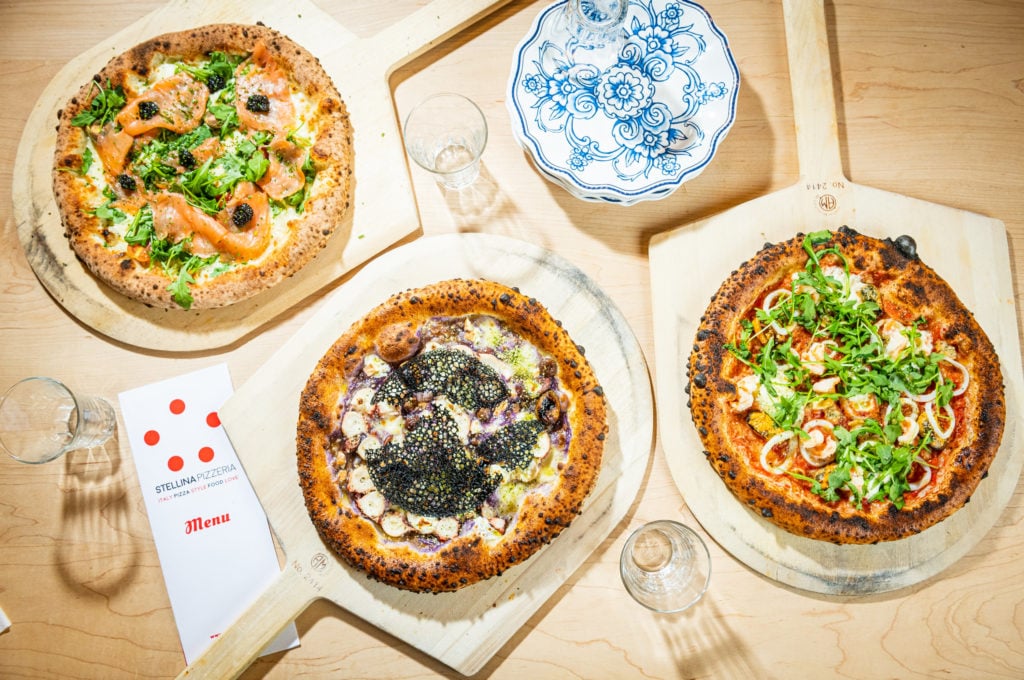 Prefer to dine at your home table these days? You’ve got plenty of DC Winter Restaurant Week options, including dinners for two, brunches, desk lunches, and cocktail deals. Most of the specials run through this weekend.

Baan Siam
425 I St., NW
Chef Jeeraporn “P’Boom” Poksupthong transported her fiery Thai cooking from Logan Circle’s Baan Thai to this Mount Vernon Triangle dining room in 2020. Her Restaurant Week menu—$70 for two—includes two appetizers, two entrees, one dessert, and two drinks (beer, Thai iced tea, or a slushy soju-and-sake cocktail). There are plenty of choices, including her excellent khao soi and vermicelli in chili/peanut sauce. Order for pick-up and delivery via Toast.

Bresca
1906 14th St., NW
The fanciful 14th Street Corridor dining room fine-tuned upscale takeout during the pandemic. Its Restaurant Week menu is to-go-only, and the $100 dinner for two features pierogi with Brillat-Savarin cheese, Wagyu beef with shallots and red cabbage, and a version of the restaurant’s elaborate duck a la presse ($20 surcharge). There are plenty of splurge-y upgrades, including a $20 shower of Perigord truffles and a $150 caviar tart. Order for pick-up via Tock.

Chiko
423 Eighth St., SE; 2029 P St., NW; 7280 Woodmont Ave., Bethesda; 4040 Campbell Ave., Arlington
These cheffy fast-casual Chinese/Korean joints—with locations in Shirlington, Bethesda, Dupont Circle, and Capitol Hill—have been nailing the takeout game from day one. You can get five courses, including an amuse bouche-sized dumpling, a panchan-menu snack, a starter, entree, and dessert, for $40 (or $75 for two). At Dupont and Bethesda, there are $25 RW lunch menus, too. Order for pick-up and delivery via mychiko.com.

Mintwood Place
1813 Columbia Rd., NW
The French/American hangout in Adams Morgan is offering a $70 dinner for two, with two appetizers, entrees, and desserts. On the menu: butternut-squash soup with toasted coconut and lime; truffled duck-liver pate; beef bourgignon; and grilled dorade with lemon/grape compote. Order for pick-up via the restaurant.

Officina
1120 Maine Ave., SW; 1525 Wisconsin Ave., NW
If you’re feeling like pasta, both the Wharf and Georgetown locations of Nick Stefanelli’s trattoria are doing $40 three-course and $55 four-course menus (the former has you choose between a pasta and entree; the latter gets you both). Order for pick-up via Toast and delivery via UberEats.

Ris
2275 L St., NW
One of the hallmarks of a great Restaurant Week menu is a generous array of choices, which is what you’ll find at chef/owner Ris Lacoste’s 13 year-old West End dining room. There are $40 and $55 dinner menus featuring Lacoste’s miso salmon tartare, her textbook onion soup, and comfort fare like meatloaf and linguine with clams. The higher-priced menu lets you upgrade your entree to Portuguese seafood stew, whole branzino, and licorice-braised shortribs. Order for pick-up via the restaurant.

Ruthie’s All Day
3411 Fifth St., S., Arlington
Matt Hill’s homey neo-Southern place also has a sprawling RW menu, packed with sandwiches, burgers, barbecue, and more. For $40, you get an appetizer, entree, side, and dessert. Go for the brisket, sticky spare ribs, pimiento cheese, and dirty rice with kimchi. There’s a $25 lunch special, too. Order for pick-up and delivery via Toast.

Shibuya
2321 18th St., NW
Some of DC’s best sushi comes out of Darren Norris’s Adams Morgan multi-restaurant (it also encompasses a bar, Death Punch, and a high-end shabu shabu room). Sample it in the $55 dinner menu ($100 for two), which kicks off with California rolls (with real crab) and four pieces of nigiri, before moving onto meats from the Binchō-tan charcoal grill with a side of Japanese eggplant. A $40 ($70 for two) version nixes the nigiri, while a $25 lunch menu includes the grilled meats with a starter of miso soup. Order for pick-up and delivery via Doordash, UberEats, and Grubhub.

Spice Kraft
1135 N. Highland St., Arlington; 2607 Mount Vernon Ave., Alexandria
These Indian bistros in Clarendon and Del Ray are offering $55 takeout packages for two, which let you pick two appetizers, two entrees, and both desserts. You also get naan and rice. Everything except the bread, samosas, and syrupy doughnuts called gulab jamun is gluten-free. They’re also taking part in Alexandria’s Restaurant Week, which kicks off tomorrow, Friday, January 21 and runs through January 30. Order for pick-up and delivery via the restaurant.

Stellina
399 Morse St., NE; 2800 S. Randolph St., Arlington
The creative Neapolitan pizzas and hearty pastas are the best reasons to visit these chic fast-casual spots near Union Market and in Shirlington. If a $55 dinner there sounds like a lot, consider that the menu includes four courses—choose both a pie and a plate of pasta, plus an appetizer and dessert. Order for pick-up and delivery via the restaurant.

Ann Limpert joined Washingtonian in late 2003. She was previously an editorial assistant at Entertainment Weekly and a cook in New York restaurant kitchens, and she is a graduate of the Institute of Culinary Education. She lives in Logan Circle.