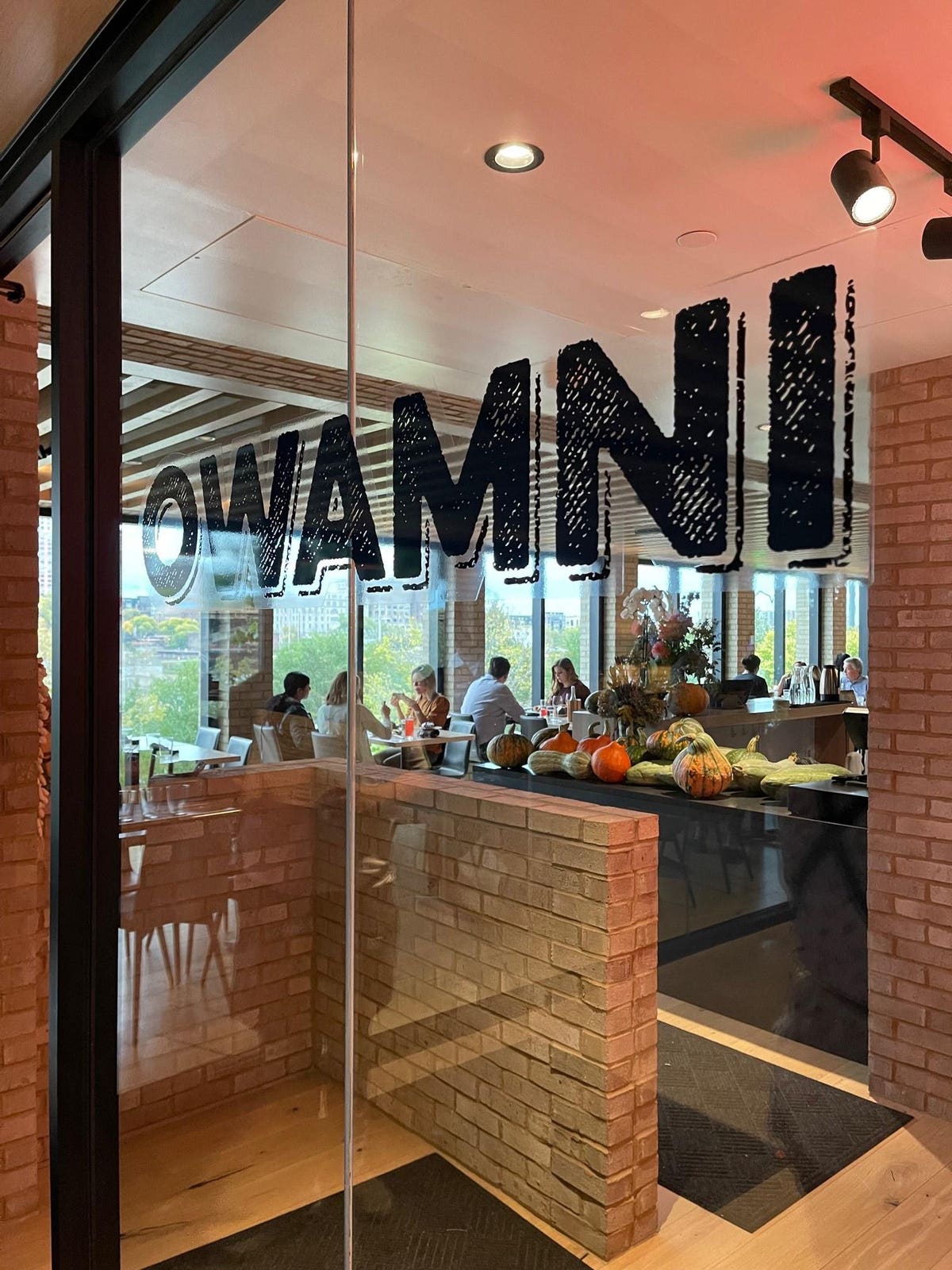 Some might say that Indigenous cuisine has been overlooked compared to the array of specialized cooking that takes place throughout the United States. But don’t tell that to Dana Thompson, co-owner and chef Sean Sherman, who run the restaurant Owamni by The Sioux Chef in Minneapolis, Minnesota.

The restaurant is located in Mills Ruins Park, built on the Mississippi River in downtown Minneapolis, but in proximity to a light rail stop. It offers views of the river and the Stone Arch Bridge.  It’s spacious, accommodating 80 seats inside and 150 seats outside.

Thompson says Indigenous food is healthy because “We remove the colonial ingredients so there’s no wheat or dairy and that drops the glycemic (defined as the effect food has on blood sugar) content so low that the food is pure, clean, healthy and delicious.”

It faced supply chain slowdowns in equipment, food sourcing and dishware. “And we had to figure out how to mask, use sanitizers, and make sure our staff and customers felt safe,” she explains.

Both Thompson and Sherman, who are partners, reside in Minneapolis, in a state with 11 Indian reservations. Chef Sean Sherman was raised in Pine Ridge, South Dakota and is a member of the Ogala Lakota tribe while Dana Thompson, the co-owner and COO, is a descendant of the Wahpeton-Sisseteon and Mdewakanton Dakota tribes.

“We were offered an opportunity by the board to form a partnership,” she says. But raising the capital to open was arduous. Most banks weren’t offering loans to restaurants during the pandemic.

But a social mission investment organization, RSF Social Finance, a San Francisco-based firm, saved the day and offered them a loan. “I don’t know how we could have opened without them,” Thompson admits.

The restaurant is also on a social mission to revive interest in the Indigenous culture. “We are bringing back Indigenous education via access to understanding of the ancestral foods and Indigenous food access,” says Thompson.

It specializes in Indigenous food that focuses on game, fish, birds, and insects along with wild plants, and avoids dairy, wheat flour, cane sugar, chicken or pork, which it considers colonized foods, not originally from this land.

Hence it relies on “a lot of corns, beans and squash as well as wild greens, pheasant, elk, Lake Superior whitefish and trout,” notes Thompson.

“We prioritize using ingredients from Indigenous producers to drive wealth into these communities,” Thompson explains.

Some of its most popular items on its menu include bison pot roast and potted duck and desserts such as wild rice/cacao cake made with duck eggs and wild rice milk. It also serves beer and wine, and its wine list consists of those produced by Indigenous wine makers.

Most of its menu, about 75% of it, is plant-based, so Thompson says consuming small amounts of meat isn’t overly harmful.

She describes that target audience as very eclectic including “Anyone that likes healthy foods and has an interest in history and culture.”

Though long-term, the duo might investigate opening a second eatery in a comparable park situation, but currently, “We’re so overwhelmed, it’s hard to imagine opening another right now,” she says.

So far, reservations at Owammi by The Sioux Chef have been hard to come by. “I think people are interested in the mission, the history, and they understand the sustainability and indigenous wisdom.”

Unlike most eateries these days, it doesn’t offer third-party delivery. Though Thompson says they might consider it in the future.