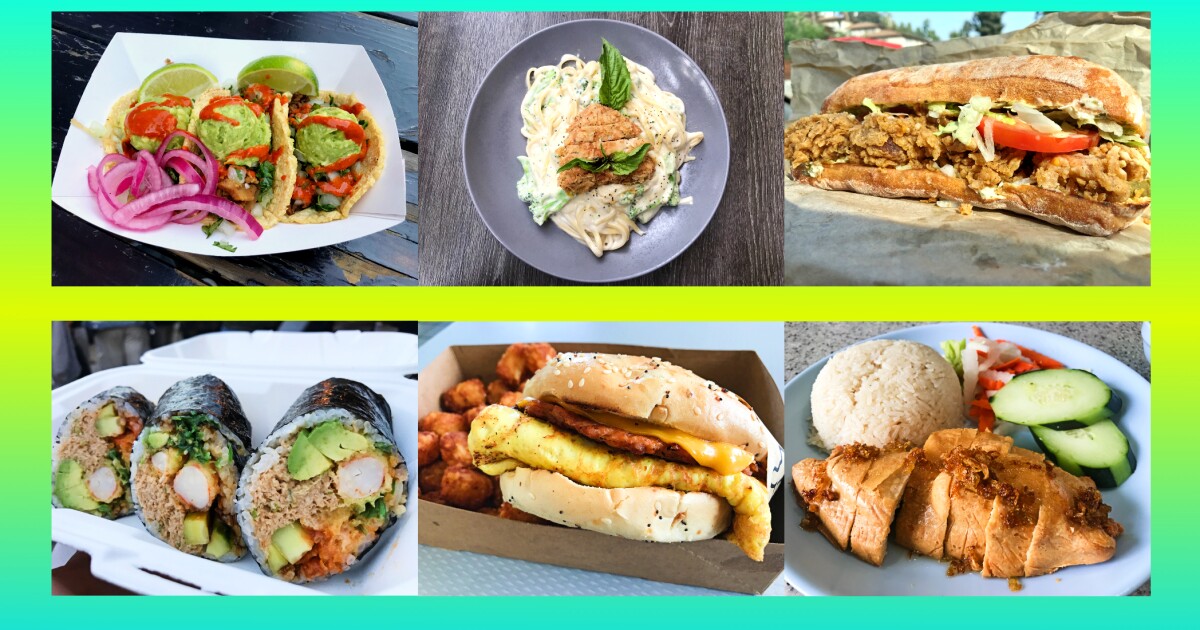 Start your day with LAist

Has there even been a better time to be a vegan? New vegan restaurants are opening all the time. Every restaurant worth its salt shakers is offering at least a few vegan dishes. And even carnivores are being tempted by Impossible and Beyond’s plant-based meats. But their offerings are just the tip of the meatless spear.

The world of plant-based proteins is booming. There’s shrimp made from mung beans and seaweed, meatballs formed from pea proteins and SPAM derived from beetroot and soy. While some of these options taste so much like the animal protein they were inspired by it’s almost freakish, this new generation of faux meats is more about creative flavors and textures and less about mimicry.

In Southern California, chefs are incorporating plant-based meats into everything from burritos and soul food to musubi and pho. Whether you’re an intrepid vegan searching for new dining destinations or an omnivorous eater who wants to cut down on your animal intake, Los Angeles has wealth of plant-based meat dishes… and here are a few of the best.

Note: Unless otherwise stated, we use the names of meats (chicken, beef, shrimp, etc.) to describe their plant-based counterparts.

Sandwiched between a window supplier and a ramen shop in an El Monte strip mall, ThienTham serves modern Vietnamese food in a spare, elegant space. The shop is busy during lunch, when diners cycle through for meatless pho and thick, pan-fried noodles. Amid the expansive menu, the hai nam rice with chicken is a standout. Its crisp exterior hides a tender, meaty interior that pairs beautifully with the ginger rice and pickled vegetables. It’s no wonder ThienTham has so many regulars, whose orders are whisked off to the kitchen after nothing more than a head nod and a wave.

After moving from North Carolina and operating a popular pop-up concept, chef Velvet Jacobs found a permanent space earlier this year for The VTree, her vegan soul food restaurant. In an airy, turquoise dining room beneath portraits of Black musical icons such as Aaliyah and Prince, diners eat plant-based takes on Southern classics. The vegan meat options are exceptional, from bourbon baked ribs to barbecue drumsticks. The must-order is the fried shrimp, which comes delicately breaded. It has a delightful texture and tastes even better with VTree’s sweet and spicy dipping sauce. Order a plate with a side of greens and sweet cornbread.

Orange County’s beloved Nice Guys has the scuffed red-and-white checkered vibe of an old school burger joint but with decidedly New Age accents. A hefty pink Himalayan salt crystal sits at the register and there’s the entirely vegan menu. At all three OC locations, you’ll find delicious burgers, fish filet sandwiches and chicken nuggets. We’re partial to the breakfast menu. The spammie breakfast bagel consists of a smoky pork patty, melted cheddar and soft scrambled non-egg on a bagel, for a vegan breakfast sandwich that’s worth waking up for. If you arrive later in the day, try the jalapeño burger with the pineapple soft serve.

Located on a busy stretch of downtown Fullerton, Chicana Vegana is a colorful spot featuring a pink-and-purple mural of a cartoon luchadora superhero and her animal sidekicks (presumably on a mission to share the glories of plant-based eating). Chef Jasmine Hernandez’s menu features Mexican American dishes including carnitas tacos, burgers with chili cheese fries and loaded nachos. The El Classico burrito makes for a hearty meal. Order it with plant-based shrimp, which has the chewy texture and faintly fishy taste of the real deal. It goes great with an agua fresca. If you still have room, take an asada taco for the road.

Man Eating Plant’s olive-colored converted bus is a staple at vegan events, where it offers plant-based takes on Chinese, Taiwanese and Japanese cuisine. Diners can order Sichuan wontons filled with brothy bites of soy-based pork or impossibly plush fried mushroom bao. But the crown jewel is the SPAM musubi, which consists of a layer of crisp, salty faux SPAM bound to warm rice by seaweed. The musubi often sells out, so wherever you plan to meet the bus, be sure to check availability and arrive early.

Lettuce Feast’s Nashville-style fried chicken has been prompting double takes since 2018, when owners Eva Cannon and Will Perrymon decided to bring their brand of Southern comfort food to the streets of L.A. Their food truck developed a cult-like following and they saw a wave of community support after one of their trucks burned down in May 2021. While the chicken sandwiches are impressive (and extremely photogenic), newcomers should try the tenders on their own, especially with the hot-honey glaze and a side of seasoned fries and spicy secret sauce.

Opened in 2020 by acclaimed chefs Joshua Gil and Matthew Egan, contemporary Mexican restaurant Mírame isn’t vegan restaurant but it features a rotating vegan entree on its menu as part of a partnership with OmniPork. On a recent visit, the kitchen was serving salted pork dumplings tucked into delicate pockets of charcoal dough and garnished with slices of avocado, fresh herbs and wildflowers. (Previously, the restaurant served exquisite squash blossoms battered and fried with vegan pork). Several salads and starters can also be made vegan. Whether you eat beside flowering bougainvillea on the patio or sip pastel margaritas at the bar, this swanky spot should please both vegans and omnivores.

Follow the smell of smoky, charred meat and you’ll find Cena Vegan at all sorts of events or head to a quiet alley in Lincoln Heights, Tuesdays through Sundays, to try their food. It’s hard to go wrong with Cena’s taco trio, which offers a choice of pollo asado, al pastor, carnitas and carne asada tacos (the carne asada has a particularly rich and bold flavor) topped with a generous dollop of guacamole, salsa and pickled red onion. Still hungry? Cena offers refrigerated meal kits that you can heated up any night of the week.

If you think vegan Chicken Alfredo is an impossible dream, downtown Whittier’s Modern Shaman might blow your mind. In this rendition, linguini noodles are dressed in a creamy cashew sauce and come with a selection of toppings, from plant-based chicken to meatballs and bacon. We recommend the lightly breaded chicken, which adds a welcome crunch to the plate of velvety noodles. If pasta isn’t your thing, the menu is filled with an eclectic mix of options, from menudo to an herby meatball sub.

Oono Sushi has made its name at vegan festivals and events throughout Southern California, where its colorful sushi rolls are a delightful alternative to the spare avocado rolls on most vegetarian sushi menus. The Samurai Roll is a favorite. Packed with shrimp tempura, spicy tuna, seaweed, avocado and rice, it’s a study in opposites: sweet and spicy, crunchy and soft. It’s a bright, mouth-watering meal for anyone craving the seemingly impossible — a bold and fishy vegan sushi roll. Like heat? Get it dusted with a layer of fiery crushed Doritos.

Located across the street from Disney Hall, Âu Lạc welcomes visitors to its neon-lit bar and roomy, modern dining room. The Vietnamese fusion restaurant is probably best known for its aromatic bowls of pho flavored with anise and clove. No matter what else you pick, start with the BBQ pork rolls. They’re filled with savory soy-based pork and crunchy vegetables, and they’re wonderful with a side of almond-hoisin sauce.

In July 2020, Oakland-based Cajun restaurant Souley Vegan launched its first Los Angeles location in true pandemic style, as a ghost kitchen, offering meals for pickup and delivery. Although you get your order from a mint-colored locker in a storefront on bustling Western Ave, the food belies the sparse service. The Aint Gator Po Boy is a hefty sandwich anchored by slightly spicy, battered seitan-and-mushroom topped with pickles, tomatoes, mustard and slaw on ciabatta. Get it with a side of seasoned collard greens. We also recommend the waffles with seitan chicken for a brunch.

In Los Angeles, all vegan roads eventually lead to Monty’s, the growing chain that has five SoCal locations. Monty’s burgers are so classic in appearance and taste, they often get compared to In-N-Out’s — although that also a wink to both joints’ lines-around-the-block popularity. The burgers at Monty’s powder blue shops are fully vegan, as is everything else on their menu. Composed of an Impossible meat patty on a bed of crunchy vegetables and a creamy house sauce, it’s an achievement in both flavor and texture. If you’re not in the mood for a burger, try the new chicken sandwich with an oat milk-based soft-serve shake.