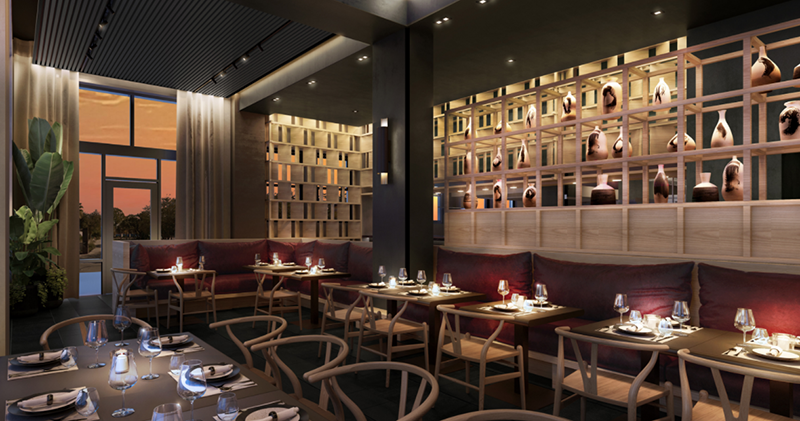 Four Man Ladder Management in Detroit, operators of Grey Ghost and Second Best in Brush Park, today announced details of its next restaurant project, which will open next year and be located on the first floor of the historic Eddystone next to Little Caesars Arena (northwest corner).

Originally announced in August, Four Man Ladder’s third restaurant concept is now under construction at 2703 Park Ave. in The District Detroit. The Eddystone is a 13-story, Italian Renaissance-style former hotel that has been converted into 92 residential units, along with ground-floor commercial spaces.

The new restaurant will be called Basan, the name of a mythological fire-breathing fowl, and true to form the kitchen will be centered around a Robata grill. Flavors and dishes prepared over an open flame will be inspired by Asian street food with an atmosphere reminiscent of an Izakaya, a restaurant known for beverage-forward menus alongside complementary shareable plates.

“Given the historic Eddystone’s proximity to Little Caesars Arena, we knew this concept needed to match the incredible energy and vibrancy found within The District Detroit and appeal to a wide variety of guests,” says Chef John Vermiglio. “The Izakaya style of dining felt like a natural fit. Our guests will be able to craft their own experience, whether that’s a pre-game stop for cocktails and a quick bite or a more curated, multi-course dinner.”

“We are excited to add Basan to the enticing mix of dining and entertainment options in The District Detroit,” says Stefan Stration, vice president of Olympia Development of Michigan, part of Ilitch Holdings Inc. in Detroit that owns the Eddystone and Little Caesars Asrena, along with multiple other downtown venues. “This unique and welcoming concept from Four Man Ladder will be a great fit for residents and guests of the Eddystone residences.”

Basan will have seating for 85 people in the indoor dining room, and 26 patrons on the patio. The restaurant also will feature private dining space, a lounge area, and a bar. Design features include an open kitchen, dramatic lighting, plush velvet cranberry red sofas, golden natural wood, and custom artwork.

Additional menu details and an opening date will be announced next year as construction progresses.

The Eddystone, which is now opening in phases, will offer a private lobby, which will be staffed 24 hours a day, custom artwork, an exercise room as well as a dog wash station for pets. The property manager for the Eddystone is Hayman Co. in Southfield.