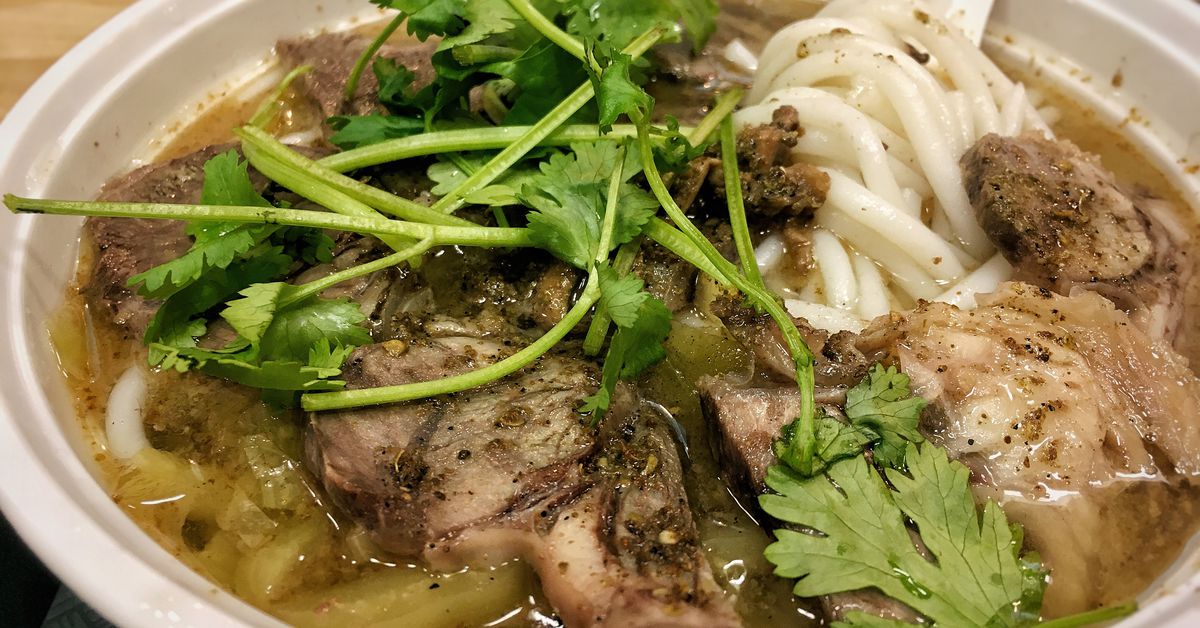 Taste of Guizhou (pronounced “gwai-jo”), Boston’s only restaurant specializing in China’s Guizhou (or Qian) cuisine, opened in Allston’s Packard’s Corner in mid-November 2021 at 1153 Commonwealth Avenue. A few months in, it’s still flying under the radar, even though it’s a significant addition to Boston’s ever-expanding universe of regional Chinese cuisines. Qian cuisine isn’t entirely new to the area — diners can find a few Qian soups on the menu at Newton restaurant IQ Kitchen — but Taste of Guizhou is the only Boston-area restaurant dedicated to the region.

The restaurant has little online presence, even on Chinese social media apps WeChat and Red, and the exterior, still displaying the Wing It awning of its predecessor, leaves little clue that a new restaurant has established itself on the premises.

“I [wanted] to open a restaurant to see if people like Guizhou food,” says co-owner George Pan, who manages the restaurant alongside his parents, Xianfeng Pan and Dianjun Pan, who prepare the food with help from one other cook. Pan, who graduated from Boston Conservatory at Berklee with a degree in contemporary dance performance a few years ago, was raised in Guiyang, Guizhou’s capital city of 5 million inhabitants. “Guizhou is deep in China, so not too many people know that area, but the food is very delicious,” says Pan. “I hope more people will know that area.”

The lush, subtropical landlocked province is located in southwestern China, with waterfalls, ancient villages, and terraced rice paddies etched into mountains. It is also home to Kweichow (Guizhou) Moutai, the world’s largest beverage company and producer of Maotai, a baiju spirit sometimes sold for over $20,000 per bottle. The region is also known for the ubiquitous Lao Gan Ma (“Old Godmother”) chile crisp sauce and also produces other traditional chile condiments that are less known globally, such as ciba lajiao, zao lajiao, zhanshui, and huajiao. Guizhou cuisine is every bit as fiery as Sichuan, but with added sour and sometimes sweet flavors complementing the spice.

Taste of Guizhou emphasizes Qian cuisine’s distinct spicy-and-sour style, which overlaps ingredients with neighboring Yunnan, Sichuan, and Hunan cuisines — styles that tend to be more familiar to Bostonians. Pan is proud to introduce Guizhou food to Boston and strongly feels it is one of the dark-horse contenders to be one of the great cuisines of China. He might be onto something. While the cultural diversity between the east coast of China and the southwest may be akin to the relationship between that of New Englanders and Southerners in the United States, everyone wants to eat each other’s food.

The current headliner at Taste of Guizhou is the Huaxi beef noodles (花溪牛肉粉), named for a suburb of Guiyang. The rice noodles are similar to those in Yunnan cuisine, which Bostonians can find at a small number of local restaurants — Wen’s Yunnan Noodle & Ramen in Back Bay and downtown Boston, Ten Second Yunnan Rice Noodles in Allston and Chinatown, and South of the Clouds in Brighton. Taste of Guizhou’s noodles have a great bite and bounce, and they stay firm throughout the meal. Customers should savor the herbaceous, subtly complex broth a bit before disturbing the other side of the bowl, where the preserved cabbage awaits. Beef slices, lean and toothsome, are topped off with very fragrant white pepper and prickly ash, better known as Sichuan peppercorn.

Taste of Guizhou has several other mifen (rice) noodle soups available, featuring chicken, seafood, or small, tender cubes of spicy braised beef. Pan designed the offerings to be flexible, so customers can have steamed rice or fresh wheat noodles instead of the rice noodles — a nontraditional option. “We had the machine, so we said, ‘Why not?’”

Pan’s favorite dish is only visible on the Chowbus delivery app (but diners can order it off-menu in person); look for fish in hot-and-sour soup for three (酸汤鱼火锅套餐 [2-3人份]). It is Taste of Guizhou’s rendition of Kaili sour fish soup, which has two red and white substyles generically called suantangyu. The soup is the pride of the ethnic minority Miao or Hmong people in Guizhou. It’s seen outside of Kaili, an area in Qiandongnan, the Miao and Dong people’s autonomous prefecture, but it’s something of a guarded recipe. Traditionally, it’s made with carp, which is readily available in Boston fish markets. The key to the dish is a fermented sauce made of rice wine, tomatoes, salt, and chile pepper. The restaurant makes it in-house, over a four- or five-day process.

Taste of Guizhou also serves a small but growing selection of side dishes, good for sharing or solo dining, including fried tofu balls; sticky rice rolled with sweet sausage and spicy sauce; fried sweet dumplings with pickled cabbage; stir-fried snails; fried potato balls; cruller wrapped in tortilla and spicy sweet sauce; and the extremely spicy “devil’s fried rice,” another dish from Guiyang, which contains sweet sausage, hot chile sauce, and cabbage. Each is under $20, and all will get diners into the rhythm of Guizhou’s spicy and sour cuisine.

The restaurant’s Guizhou offerings are complemented by a ready-to-rock big plate chicken from Xinjiang in northwest China, simply labeled “hot chicken stew” on the menu, featuring creamy potatoes, bell pepper, and chopped bone-in chicken. “It’s a dish that is popular all over China,” says Pan, “and one of our chefs happens to make an excellent version of it.” Pan and his family aim to please by making customization available here too: It may be “big” plate chicken, but one can order it in small, medium, or large, and there’s also the option to get it on rice in place of the customary wide belt noodles.

Taste of Guizhou is currently open for lunch and dinner Tuesday through Sunday, offering 16 indoor seats, takeout, and delivery. Note that while the restaurant’s printed menu seems to offer a very abbreviated taste of Guizhou, customers can find a more expansive selection on delivery platforms such as Chowbus, or by inquiring by phone or in person.