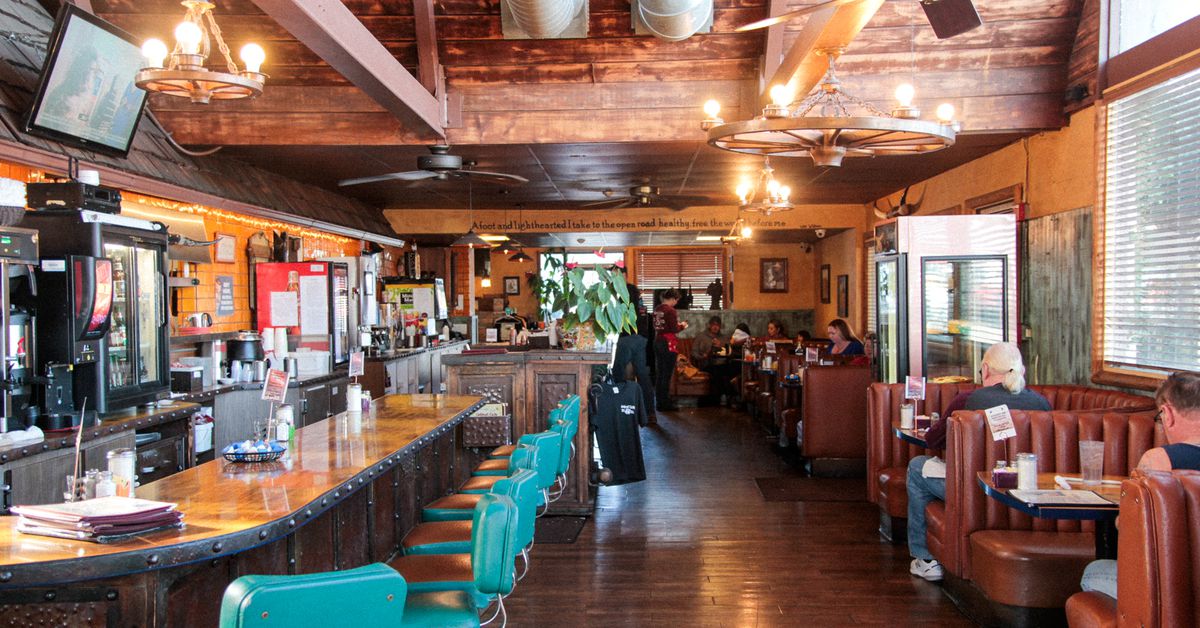 At the intersection of the 15 and 395 freeways, where the Cajon Pass stretches out of the San Bernardino Mountains, stands a 62-year-old A-frame building with tattered wooden shingles and vaguely country and western accents. Long rows of 18-wheeler trucks are parked out back. Inside, leather booths line the walls while worn turquoise seats frame a gleaming wood-grained counter, with the aroma of frying oil and hot coffee wafting beneath the high wood-paneled ceilings. Wagon wheel light fixtures hover overhead while kitschy signs like “We don’t have Wi-Fi. Talk to each other, pretend it’s 1995” dot the walls.

This weathered roadside diner is the Outpost Cafe, and it’s one of a dying breed.

First built in 1929, the Outpost originated as a gas station and six-seat diner. In 1961, the restaurant moved across the road into its current building to make way for the I-15 freeway. Truck drivers have long been loyal patrons of the Outpost Cafe. Motorists frequently stop in with stories about the old wedding chapel that used to stand on the property. Individual servers and cooks have fans among the locals in the nearby town of Hesperia.

Last year, Ryan Dandurand took ownership of the Outpost Cafe from his father, Mike, who acquired the restaurant in 2010. The younger Dandurand had been working at a carpet-cleaning company and initially saw the restaurant as a way to avoid working in a suit and tie. But as he learned about the restaurant’s history, he realized he was continuing the legacy of something far bigger than himself.

Sherry Spearow, a server at the restaurant since 1992, says that the Outpost Cafe is the only place many truckers will stop to eat in the entire state of California. “They’ll go 50 miles out of their way to come here because it’s good hometown cooking,” she says. “Mom-and-pop places are few and far between, and most of the truck stops now are taking the restaurants out and putting in fast food.”

Scott Colon, a truck driver based out of Arizona, had just finished delivering a load from Tucson to Camp Pendleton in San Diego. Tired and hungry, Colon decided to make the trek to what he calls “the best food in California.”

“If you do any traveling, if you go the old routes like Route 66, there aren’t any diners anymore.”

“I came 110 miles, even though I have to go in the other direction, just so I can eat here,” says Colon. “If you do any traveling, if you go the old routes like Route 66, there aren’t any diners anymore. It’s all Taco Bell, Jack in the Box, McDonald’s.” Colon estimates that places like the Outpost Cafe make up less than 10 percent of the food options on his routes crisscrossing the country.

The Outpost Cafe’s food is good old-fashioned American fare. Items like chicken-fried steak with eggs and bacon or a 12-ounce rib-eye with loaded baked potatoes are popular. The Meatloaf Masterpiece sandwich with sweet potato fries is a consistent best-seller. The food here is uncomplicated and nostalgic — spaghetti and meatballs, California chicken salad, salmon dinner. For truckers used to the bland offerings of IHOP or Wendy’s, a juicy Cowboy Bacon Cheeseburger after a long drive is a reminder of home, of warmth and care.

Many truckers sleep parked in the Outpost’s lot overnight, according to Andrea Welton, a server at the restaurant and Dandurand’s fiancee. They’ll use the nearby Pilot station to shower and be in line for the Outpost Cafe right when it opens at 6 a.m. Breakfast service is usually abuzz with plates of divorced eggs, steak and hash, and sausage biscuits flying out of the kitchen.

“During COVID, I think people realized how important truck drivers are,” said Ryan Dandurand. “It’s not fair that they don’t have real options for food when they’re delivering it to everyone else.”

“It’s not fair that they don’t have real options for food when they’re delivering it to everyone else.”

But it’s not just truckers who come through. Travelers on their way to Las Vegas will stop by to celebrate their wedding anniversaries, and families from Hesperia will bring their kids and grandkids in for the chicken tenders and mac and cheese. U.S. Route 395 goes on to Bishop, Mammoth Lakes, Lake Tahoe, and Reno, Nevada; Interstate 15 goes on to Las Vegas and Salt Lake City. Given its location, the Outpost Cafe has become the go-to lunch break for many making the journey from Southern California outwards.

Elvira Canelo, a cook at the Outpost Cafe for 30 years, credits the success of the place to its strong ownership. “They’re the best people,” she says of her bosses. The Outpost Cafe was Mike Dandurand’s pride and joy. He developed relationships with the local community, and even when he became too sick to work and retired to Mexico, he would check the video camera feeds every day and bug his son about little fixes. Were the floors clean? Were there four shirts hanging on display at the front counter?

On November 23, 2022, Mike called Spearow at the Outpost. “Ryan had just left for Thanksgiving with Andrea. Mike called and said to me, ‘I’m just checking in with you, is everything okay?’” They chatted about her family, whom Mike had known for years, and then he said to her, “Well, Ryan’s out of town … if there’s anything I can do for you, I’m just laying around, just give me a call.”

Mike passed away later that day.

“I don’t want to fail my dad and let this place turn into a Taco Bell,” says the younger Dandurand. “The one thing I think about that he always told me was: ‘Do the right thing and always take care of people.’”

Dandurand is doing his best to uphold the vision his father set forth for the restaurant — a mom-and-pop stronghold providing good food and good service to its loyal fans year after year. The next time you’re en route from Los Angeles to Las Vegas, swing by the Outpost Cafe for a warm meal and a hot cup of coffee, made by people who have been lovingly serving their community for generations.

the arts of razaris